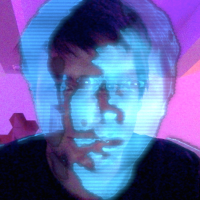 Jeff Crouse creates software and installations that highlight the absurdity of technology in culture. Jeff’s previous works include YouThreebe, a YouTube triptych creator; Invisible Threads, a virtual jeans factory in Second Life; and James Chimpton, a robotic monkey that interviewed the artists of the 2008 Whitney Biennial. He is currently developing BoozBot, a bar tending robot/puppet; and DeleteCity, a WordPress plug-in that finds and republishes content that has been removed from sites such as Flickr and YouTube. His work has been shown at the Sundance Film Festival, the Futuresonic festival in Manchester, UK, the DC FilmFest, and the Come Out and Play Festival in Amsterdam. Jeff received his MS from the Digital Media program at Georgia Tech in 2006 and then joined Eyebeam as a production fellow in 2007. He is currently a Senior Fellow at Eyebeam, an adjunct professor at the IMA program at Hunter College, and a freelance programmer.